The Federal Government has enacted new Bounty Action Whistleblower Reward laws that offer large financial rewards to individuals and businesses that properly expose illegal bribes to government officials and other violations of the Foreign Corrupt Practices Act. These new Bounty Action Whistleblower Reward laws allow professionals to expose fraud through an attorney while protecting their identity and seeking a financial reward. These laws are first to file laws and require original information or specialized information, but do offer large financial rewards to the first whistleblower that properly exposes the fraud and corruption. The first step for many professionals that want to expose fraud and corruption is to have a lawyer confidentially review their potential case and provide advice as to which laws may apply and the strength of their potential case. 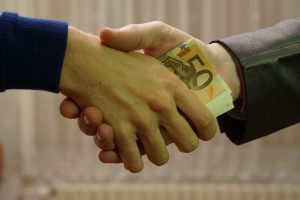 Bounty Actions Can Be Used to Expose Government Corruption, Illegal Bribes, and other Violations of the Foreign Corrupt Practices Act

With the success of the Federal False Claims Act and several state false claims act, the United States has enacted new Bounty Action Laws to expose government corruption, illegal bribes, slush funds, illegal kickbacks, false accounting, and other violations of the Foreign Corrupt Practices Act. For more information on these laws please go to the following web site: International Whistleblower Reward Information. These whistleblower reward laws were designed to protect whistleblowers that step up and blow the whistle on financial fraud.

The Foreign Corrupt Practices Act and the new SEC Whistleblower Incentive Program work together to reward whistleblowers with original and specialized knowledge and evidence of international business corporate bribery and illegal kickbacks. These new international business whistleblower reward laws are part of a worldwide movement to expose and punish government corruption such as contract bribes, illegal kickbacks, and large scale international fraud. These Foreign Corrupt Practices Act should help prevent government corruption in many countries including Russia, China , Mexico, and Brazil.

Offering large financial awards and economic incentives to persons with knowledge of crimes and criminals including offering whistleblower rewards and whistleblower bounties have been an extremely effective method of identifying unlawful conduct, crimes, and criminals. When the government offers the economic reward to private citizens for exposing fraud against the government, such actions are called “qui tam actions”. In these actions, the plaintiff is suing on their own behalf as well for the government and taxpayers.

The qui tam provisions of the False Claims Act are based on the theory that one of the least expensive and most effective means of preventing frauds on taxpayers and the government is to make the perpetrators of government fraud liable to actions by private persons acting under the strong stimulus of economic benefit as well as patriotic duty, personal ill will, and/or strong personal ethics.

The strong public policy behind creating an financial reward for whistleblowers is that the government would be significantly less likely to learn of the allegations of fraud, but for persons in certain positions with specialized knowledge of Medicare fraud, Medicaid fraud, defense contractor fraud, investment fraud, foreign business fraud, tax fraud, or significant fraud that has been committed. Congress has made it clear that creating these financial incentives is beneficial not only for the government, taxpayers, and the realtor, but is an efficient method of regulating government to prevent fraud and fraudulent schemes.

During the Civil War, corrupt military contractors were defrauding the United States Army out of hundreds of thousands of dollars and putting troops at risk by supplying troops with defective products and faulty war equipment. Illegal price gouging was a common practice and the armed forces of the United States suffered. In response, Abraham Lincoln enacted the Federal Civil False Claims Act. A key provision of the act was known as qui tam.

This Act was weakened in 1943 during World War II while the government rushed to sign large military procurement contracts. However, it was strengthened again in 1986 after a long period of and increase in military spending as well as many stories of defense contractor price gouging and government waste.