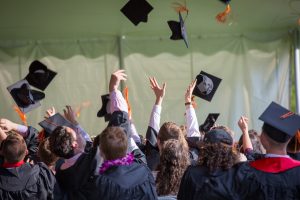 Federal Whistleblower Rewards are part of the Federal False Claims Act and allow whistleblowers that are aware of and have specialized knowledge of significant fraud against the government including student loan fraud to report the fraud and receive from 15% to 30% of the money recovered by the government.

WASHINGTON – Four student aid lenders have paid the United States a total of $57.75 million to resolve allegations that they improperly inflated their entitlement to certain interest rate subsidies from the U.S. Department of Education in violation of the False Claims Act, the Justice Department announced today. The settlements resolve allegations brought in a whistleblower action filed in the Eastern District of Virginia under the False Claims Act, which permits private citizens to bring lawsuits alleging violations of the Act on behalf of the United States and to share in any recovery. The whistleblower suit was filed by Dr. Jon Oberg, a former employee of the Department of Education, who alleged that several lenders participating in the federal student financial aid programs created billing systems that allowed them to receive improperly inflated interest rate subsidies from the Department of Education. The United States did not intervene in this action, which was litigated by the whistleblower, but it provided assistance at many stages of the case, including during the settlement process.

“Collaboration between the federal government and citizens with knowledge of fraud is important to the successful enforcement of the False Claims Act,” said Tony West, Assistant Attorney General for the Civil Division of the Department of Justice. “Whistleblowers like Dr. Oberg are critical to our efforts to recover taxpayer money lost to waste, fraud, and abuse.”

“The U.S. Attorney’s Office remains committed to assisting ordinary citizens who blow the whistle on wrongdoing by companies that take taxpayer dollars,” said Neil MacBride, U.S. Attorney for the Eastern District of Virginia. “Through the efforts of one citizen and the government, these lenders will be paying millions back to the government.”

WASHINGTON – The United States has intervened and filed a complaint in a whistleblower suit pending under the False Claims Act against Education Management Corp. (EDMC) and several affiliated entities, the Justice Department announced today. In its complaint, the government alleges that EDMC falsely certified compliance with provisions of federal law that prohibit a university from paying incentive-based compensation to its admissions recruiters that is tied to the number of students they recruit. Congress enacted the incentive compensation prohibition to curtail the practice of paying bonuses and commissions to recruiters, which resulted in the enrollment of unqualified students, high student loan default rates and the waste of program funds.

“Colleges should not misuse federal education funds by paying improper incentives to admissions recruiters,” said Tony West, Assistant Attorney General for the Civil Division of the Department of Justice. “Working with the Department of Education, we will protect both students and taxpayers from arrangements that emphasize profits over education.”

“Federal tax dollars must be protected from abuse,” said David J. Hickton, U.S. Attorney for the Western District of Pennsylvania. “This action against EDMC seeks to recover a portion of the $11 billion in federal student aid which EDMC allegedly obtained through false statements and which enriched the company, its shareholders and executives at the expense of innocent individuals seeking a quality education.”

The False Claims Act allows for private citizens to file whistleblower suits to provide the government information about wrongdoing. The government then has a period of time to investigate and decide whether to take over the prosecution of the allegations or decline to pursue them and allow the whistleblower to proceed. If the United States proves that a defendant has knowingly submitted false claims, it is entitled to recover three times the damage that resulted and a penalty of $5,500 to $11,000 per claim. When the government intervenes, the whistleblower can collect a share of 15 to 25 percent of the United States’ recovery.

The suit was originally filed by Lynntoya Washington, a former EDMC admissions recruiter, who later filed an amended complaint, jointly with Michael T. Mahoney, a former director of training for EDMC’s Online Higher Education Division. The states of California, Florida, Illinois and Indiana have also intervened as plaintiffs.

This matter was investigated by the Commercial Litigation Branch of the Justice Department’s Civil Division; the U.S. Attorney’s Office for the Western District of Pennsylvania; and the Department of Education, Office of Inspector General.

The United States has filed a complaint under the False Claims Act against Stevens-Henager College, Inc. and its owner, The Center for Excellence in Higher Education, for illegally compensating recruiters, the Department of Justice announced today. Stevens-Henager operates a chain of for-profit colleges in Idaho and Utah.

“Congress has made clear that colleges should not pay improper incentives to admissions recruiters,” said Assistant Attorney General for the Justice Department’s Civil Division Stuart F. Delery. “The Department of Justice and the Department of Education are working together to combat unlawful recruitment practices that can harm students and result in the waste of taxpayer funds.”

In its complaint, the government alleged that the college falsely certified compliance with provisions of federal law that prohibit a university from paying incentive-based compensation to its admissions recruiters based on the number of students they recruit. Congress enacted the prohibition on such incentive compensation to curtail the enrollment of unqualified students, high student loan default rates, and the waste of student loans and grant funds.

The claims alleged by the United States were initiated by a whistleblower lawsuit filed by two former Stevens-Henager employees under the False Claims Act, which allows private citizens to file suit over false claims on behalf of the government. The act provides for the recovery of triple damages and penalties, and allows the government to intervene and take over the allegations, as it has done in this case. The whistleblower is entitled to a share of any recovery obtained in the lawsuit.

“Fighting fraud and protecting federal tax dollars from abuse is a priority for this office,” said U.S. Attorney Wendy Olson for the District of Idaho. “The False Claims Act is an important tool for doing just that. Whistleblowers are necessary to our ongoing efforts to combat fraud, waste and abuse.”

This matter was investigated by the Commercial Litigation Branch of the Justice Department’s Civil Division, the U.S. Attorney’s Office for the District of Idaho, and the Department of Education, Office of Inspector General. The case is captioned United States ex rel. Brooks v. Stevens-Henager College, Inc., et al., Case No. 1:13-CV-00009-BLW (D. Id.). The claims asserted are allegations only, and there has been no determination of liability.

There are a variety of types of whistleblower protection statutes that may apply to a particular whistleblower action. The main goal of these statutes is to offer protection to heroes and whistleblowers that are strong and brave enough to stand up to corporations and senior executives that are fraudulently stealing from the United States government, state government, or local governments or intentionally violating health and safety laws.

Offering large financial awards and economic incentives to persons with knowledge of crimes and criminals including offering whistleblower rewards and whistleblower bounties have been an extremely effective method of identifying unlawful conduct, crimes, and criminals. When the government offers the economic reward to private citizens for exposing fraud against the government, such actions are called “qui tam actions”. In these actions, the plaintiff is suing on their own behalf as well for the government and taxpayers.

The qui tam provisions of the False Claims Act are based on the theory that one of the least expensive and most effective means of preventing frauds on taxpayers and the government is to make the perpetrators of government fraud liable to actions by private persons acting under the strong stimulus of economic benefit as well as patriotic duty, personal ill will, and/or strong personal ethics.

The strong public policy behind creating an financial reward for whistleblowers is that the government would be significantly less likely to learn of the allegations of fraud, but for persons in certain positions with specialized knowledge of Medicare fraud, Medicaid fraud, defense contractor fraud, investment fraud, foreign business fraud, tax fraud, or significant fraud that has been committed. Congress has made it clear that creating these financial incentives is beneficial not only for the government, taxpayers, and the realtor, but is an efficient method of regulating government to prevent fraud and fraudulent schemes.